Do you remember Ultima Online? 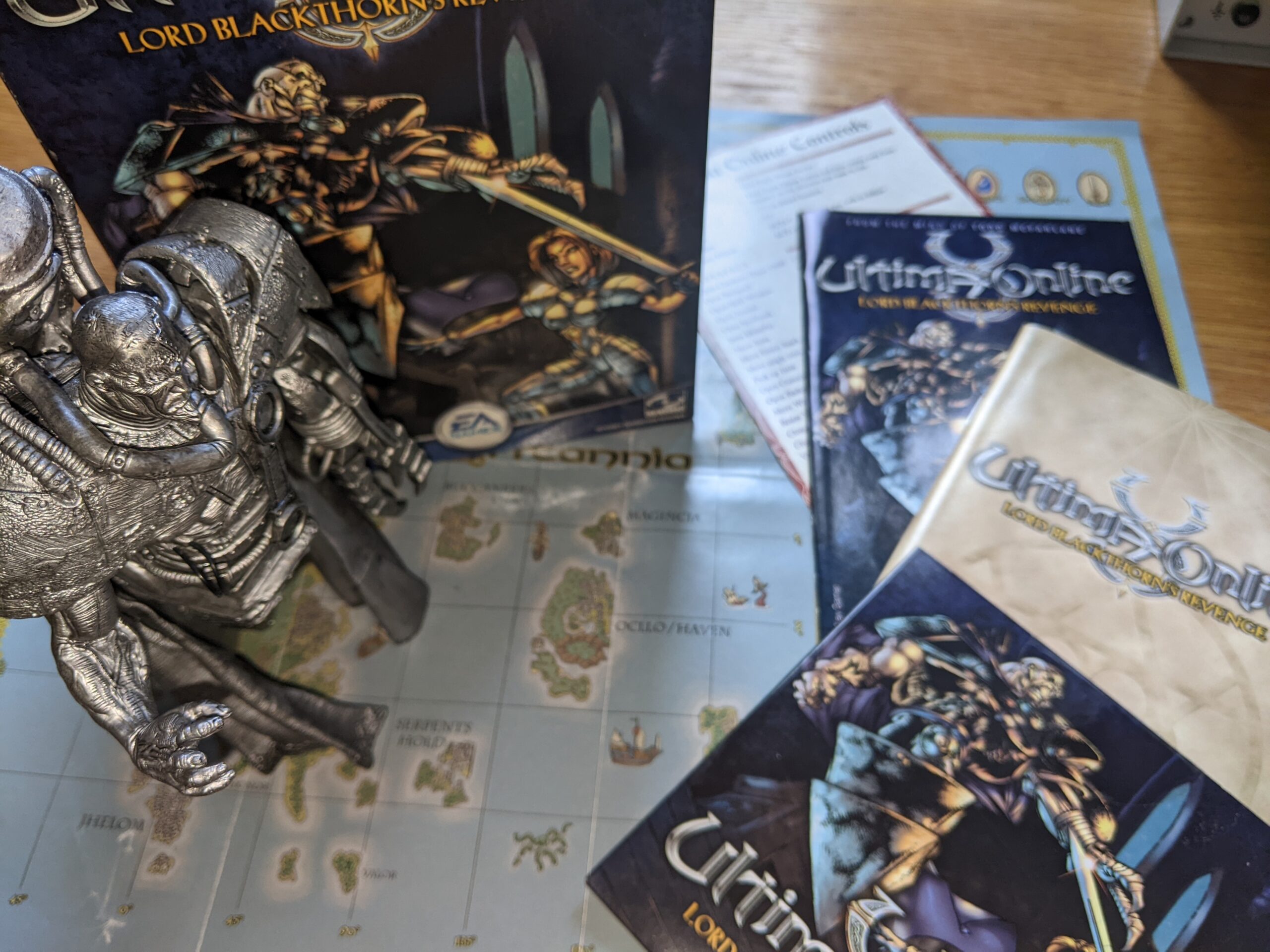 It has already been twenty-five years since we could go to Sosaria together. It was pretty new to play with other people in a graphical game. Ultima Online wasn’t the first online MMORPG (although now it’s assumed the term came with this game). But I do believe it was the best one. Why do I think so? I will get to it. But first, a bit of history lesson.

Ultima Online was released on 24 September 1997. If you would count closed alpha and beta, it’s even older for some people, but for us mere mortals, it’s twenty-five years old! What an achievement.

The official servers are still on, not like with some other games. While writing this post, I checked on them – they’re online but empty. I have visited 10 servers and found barely anyone. And those I saw were just standing in the bank and didn’t react to my attempts to communicate. It was sad. I remember the game flourishing with life those almost twenty years ago when I left.
Yes, I left almost twenty years ago, and now I’m complaining that no players are in sight. It might be that the players had reasons, the same as I did. I had problems with the changes the Age of Shadows introduced.

But I should start at the beginning, not at the end. I was just finishing primary school and totally oblivious to UO’s existence when it launched. I found out about it about two years later. But it was inaccessible to me. You needed a credit card that had enabled internet payments – not doable at that point in the Czech Republic. My temporary workaround was playing on some Czech unofficial servers and waiting for any of the Czech banks to acknowledge the internet.
Such change happened when I finished secondary school. So I finally moved to the official Ultima Online servers. It was 18 August 2001. The game was glorious!
On the free shards (that’s what Ultima servers are called), some things didn’t work, and some were weird. On the official ones, everything made sense, and everything worked.
However, as I’ve mentioned – the perfection was broken with the new expansion less than two years later. It was very emotional for me, leaving the best game I knew. It was also the moment when my Sisyphean quest began – I started to look for an online game that would make long-term sense to me. After all that time, many online games, and even more disappointments, I can admit that I was just looking for the good old UO.
I really hope that one day I will be able to get over it. To be happy with some other MMORPG for a more extended period. Now it is time to explain why I think it was the best game. It’s my point of view. I’m not trying to convince you that it’s the game for you; it quite possibly isn’t. But this list might give you some things to consider. It certainly
isn’t a definite list. And the points on this list might not work so well separately, but together they were magical.

Can you even imagine it? No endgame content. Everything is available from the beginning. No scaling of difficulty. No content to run towards? Nothing to skip because it’s below your current level? As there weren’t any areas scaled by character level, people were everywhere, and all the dungeons were full. And this was the time before anything was instantiated, so you could see the world flourishing with life.
It also meant that everything was hard. You were more often dead than you’ve celebrated success. But when you did, that feeling of success was enormous.

The variety of equipment wasn’t significant. You didn’t have fifty variants of a sword (with two hundred different visuals). There was no need to grind for better gear, spending a week in a dungeon to get ‘the sword’. And it was good, especially considering that all your equipment stayed in your dead body whenever you were killed. Free to loot by anyone.
Imagine how stressful it would be using your rare, special equipment and losing it every time something/someone kills you? Would you even use it? Having generic equipment didn’t make it that painful. You didn’t need to finish some dungeon fifty times to re-equip your character.
On the other hand, you needed to take care of your equipment. It (not only weapons, everything) was falling apart when you used it. That meant either training other of your characters as crafters or finding other players who already were ones.

Almost all the items in the game were craftable by players. It made economic sense to craft and sell what you’ve produced. Technically everything was consumable (even armour if used long enough), so every crafting skill was monetisable.
Sure, it was long before any auction houses (and their “digital download” delivery of anything, anywhere, instantly) of today. But you could hire a vendor and put it into your house to sell your stuff.

You could own a house. Your unique home. Not just another instance of a place a thousand other players have. Could anything else in the game give you more feeling of belonging somewhere? It wasn’t cheap, but it was another achievement to collect enough money to get it.
The high price was caused by the limited space where you could build houses. There just wasn’t enough space for everybody to own a house. The prices skyrocketed over time, as with the actual housing market.
Houses deteriorate over time if left unattended for more than a week. And when they collapsed, they made space for new buildings.
The abovementioned vendors also made owning a house even more interesting. And do believe me, when you’ve found a player shop with cheap, high-quality equipment, you will return. Even if it was on the other side of the map.

Shards with a limited population

Shards (separated world) were a way to overcome a hardware limitation of its time. The shard limit was around 2500 simultaneously logged-in characters.
Origin made multiple shards with a vision of merging them on the day when technology allowed. That would be doable years ago, but the merge never happened. If it did, it would harm the community. Shards helped to build community. The number of players on the server was limited to a few thousand. It was much easier to know ‘celebrities’, best craftsmen or player killers. It helped to build social connections. It gave players the feeling of neighbours and a living world with real characters. It wasn’t as anonymous as contemporary MMORPGs.
The merge also didn’t happen because no one wanted to lose their house.

There were no hard-defined classes for the characters. You could combine any skill with others if you fit under the skill cap of 700 (seven skills to one hundred per cent). With forty-nine skills, the number of combinations was almost limitless. The skill cap was a catch, though. For a perfect build, you needed eight skills or more… you were always missing 😀
Whatever skillset you’ve chosen, you could always change it. Just decide what skill to start forgetting and which to start learning.
You could start as an alchemist who doubles as a fisherman. Then change it to a thief and pickpocket other player characters. Ending as a full-blast mage. The choices were limitless.

No pay to win

There was just a monthly payment. That was it, nothing else.
I understand that some people want their extra special visual and are willing to pay for it – and I have no problems with it. But I don’t believe they would appreciate potentially losing them every time their character dies. Unless these “skins” for equipment could be bounded to the character/account.
But I have issues with whales’ buying abilities, skills, and in-game money.
Not because I can’t afford it but because it’s diminishing the gaming experience from the game. At least, I believe so. And yes, there were pay-to-win options even when the game didn’t support them. People were buying gold on eBay or paying someone to train their characters, but it wasn’t as obvious and easy as buying it from the in-game shop.

So many of the game aspects promoted player cooperation.

The game gave us so much happiness and so much frustration too. But one could not exist without the other. It also gave me some good friends I’m keeping twenty years later.

To my surprise, I’ve managed to recover my old account while fact-checking my memories. There was nobody to play with. So I’ve also checked the free servers (run by enthusiasts) and found one quite close: Renaissance – close to what I consider the best version of Ultima Online. Sure, they have some deviations, but I’m inclined to forgive them, as they’re the closest option to my memories of the best MMORPG of my life.

I wrote this after reading a Raph Koster post.